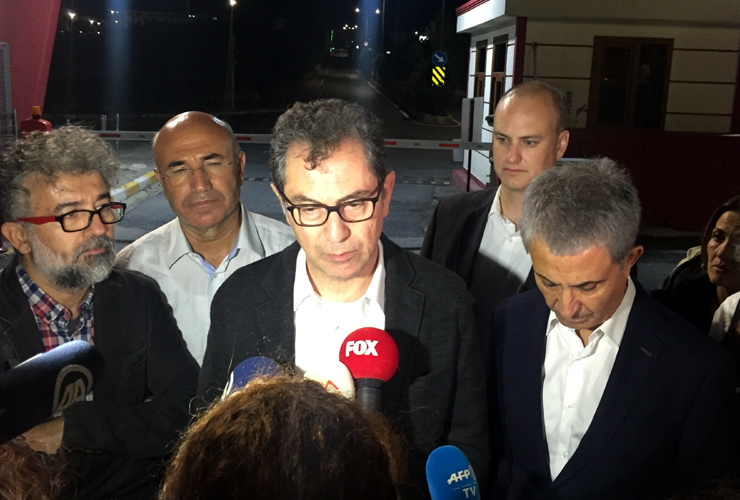 IPI joins international media freedom watchdogs in calling for release of all journalists jailed for their work.

RTICLE 19, the International Press Institute (IPI) and Reporters Without Borders welcome Monday’s release of Cumhuriyet columnist and IPI Turkey representative Kadri Gürsel after more than 11 months in pre-trial detention. Gürsel was freed following a third hearing in the trial of over a dozen journalists and staff working for Cumhuriyet, one of Turkey’s last remaining national opposition papers.

All three organisations, representatives of which attended Monday’s hearing at Istanbul’s Çağlayan courthouse, repeat their call for the release of the four Cumhuriyet journalists still behind bars – Chief Executive Akin Atalay, Editor-in-Chief Murat Sabuncu, investigative journalist Ahmet Şık and accountant Emre İper – and all other journalists detained in Turkey on politically motivated charges.

“The ruling is bittersweet,“ IPI Director of Advocacy and Communications Steven M. Ellis said. “We’re extremely glad that Kadri Gürsel was released after nearly 11 months, but equally disappointed our other colleagues were not. Monday’s proceedings, with a parade of witnesses offering irrelevant commentary instead of facts, demonstrated again how absurd this case is. And this ruling, while a step forward, is a reminder of the extreme pressure those who fight for press freedom and government accountability still face in Turkey.”

The Cumhuriyet journalists and staff are charged with aiding a terrorist organisation without being a member and face between seven-and-a-half and 43 years in jail. Among other allegations, they are accused of supporting the Gülen movement, despite Cumhuriyet’s long track record as a leading critic of the movement. Evidence cited in the indictment includes an alleged change in the editorial policy of the paper in addition to comments, interviews and social media posts of the journalists.

“Gürsel’s release is a welcome relief, but he should never have been there anyway,” Katie Morris, Head of Europe and Central Asia Programme at ARTICLE 19, said. “Any celebrations are undermined by the continued detention of his colleagues at Cumhuriyet, not to mention all the other journalists spending yet another night in jail in Turkey, for no reason other than doing their job.”

Three witnesses gave testimony at the third hearing, which related to a separate civil case regarding a dispute within Cumhuriyet’s board. Despite their disagreements, the witnesses stated that they did not believe that the defendants should be charged with aiding a terrorist organisation, and urged the court to release them.

“This Kafkaesque trial, in which journalists are being treated as terrorists, cannot go on,” Reporters Without Borders said. “Kadri Gürsel’s release is no more than a very partial achievement. These absurd proceedings must be abandoned and all of the Cumhuriyet employees and journalists must be freed.” .

Other circumstantial evidence against defendants lacks credibility. Notably, the indictment lists the number of “Bylock” users with whom the defendants allegedly had contact. Bylock is a secure messaging mobile application allegedly used by members of the Gülen movement, which Turkish authorities blame for last year’s failed coup. Use of the application is now considered evidence of membership in a terrorist organisation. The defendants in the Cumhuriyet trial are not themselves accused of having used the application, but rather of having entered into contact with individuals who did. The indictment against Gürsel cites as evidence text messages from Bylock users to which Gürsel did not reply.

While the evidence that the journalists did contact Bylock users is slim at best, international standards on the right to freedom of expression protect journalists’ right to communicate with a wide range of sources in order to cover stories in the public interest. Merely communicating with a terrorist group can not be interpreted as support for that group, just as criticism of the government cannot be interpreted as sympathy for a terrorist organisation.

At least 170 journalists and media workers are in jail in Turkey. The Turkish government claims that no journalists are in jail in relation to their work. However, as in the Cumhuriyet case, indictments frequently cite mainly newspaper articles, columns or interviews as proof of terrorist or similar activity, in addition to circumstantial evidence lacking in credibility.(IPI)